In the Cars Play Set Game, race to Radiator Springs to help Lightning, Holley, Mater and Francesco prepare for an International Race Invitational. But watch out! Chick Hicks is about to put the skids on everything. Get in gear with our heroes plus Finn McMissile, Fillmore, Ramone and Flo and stop Chick in his tracks!

When not overridden by the Boom Box or other toy with its own music:

The Cars Play Set includes a Vault, which requires each of the character figures to unlock. 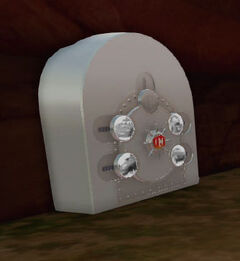 The Vault for the Cars Play Set Game is located just outside of Radiator Springs near the Radiator Springs Courthouse, underneath a cliff overhang (it is visible from the courthouse if one looks carefully). It can be reached as soon as the game starts, after the player acknowledges Guido's dialog and can move freely about the game.