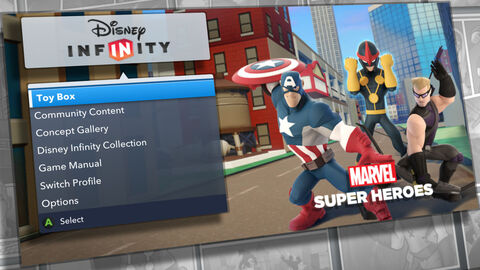 Disney Infinity 2.0 is the second Edition, and includes a number of Play Set Games, Character Figures, and Power Discs based on Disney and Disney•Pixar franchises. This release also includes additional content based on Marvel Studios franchises for the Avengers, Guardians of the Galaxy, and Spider-Man.

For the first time, there are also four Toy Box Games. Any Character Figure from the corresponding studio(s) may be used in each.

Each are sold separately, although some are also available as part of either the Marvel Super Heroes or Toy Box Starter Packs.

There are a total of 31 Character Figures for this Edition:

Typically, only the figures for a specific franchise can be used in each Play Set Game. However, Marvel Games for the 2.0 edition include a number of "Crossover Coins" for certain characters of other Marvel franchises. Collecting all ten (10) of these coins within a Play Set Game allows the figure pictured on the coin to "crossover" to the Play Set Game for the franchise where the coins were collected. As with the 1.0 edition, all 2.0 Character Figures can be used in the Toy Box.

Disney Infinity 2.0 includes a number of Prebuilt Toy Box Worlds; some of which are available by default, while others can be unlocked during game play. These can be edited and saved as new Toy Boxes.

This category has the following 3 subcategories, out of 3 total.

The following 61 pages are in this category, out of 61 total.

The following 61 files are in this category, out of 61 total.