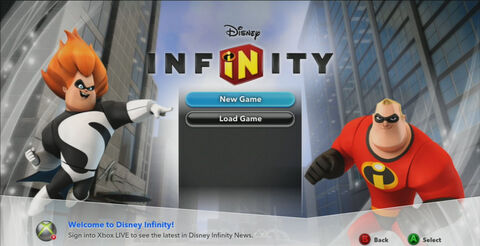 Incredibles is one of three Play Set Games available with the Game Piece from the Disney Infinity 1.0 Starter Pack.[1] Syndrome is out for revenge again! Gather intelligence, analyze Syndrome's technology, and learn to use Zero Point Energy in an epic final battle over downtown Metroville.

When not overridden by the Boom Box or other toy with its own music, using the Metroville Sky skydome causes the Boom Box music "Metroville" (aka "Saving Metroville", track 17 on the Incredibles soundtrack) to be played. This can be heard in "The Incredibles" movie near the end where they've arrived in Metroville and exit the motor home.

The Incredibles Play Set Game includes a Vault, which requires each of the Character Figures to unlock. Once unlocked, "Metroville Toy Box" is added to the list of Prebuilt Toy Box Worlds. 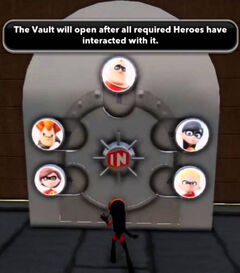 The Vault for the Incredibles Play Set Game is located on top of a building at the edge of the city, near the island across from where Edna Mode first lands. To reach it, the player only needs to complete enough of the introductory/tutorial missions to obtain Mr. Incredible's Sports Car and unlock the gated area at the docks.