When not overridden by the Boom Box or other toy with its own music, using the Colby Sky skydome causes the game to play the Boom Box music "The Ballad of Tonto".

The Lone Ranger Play Set includes a Vault, which requires each of the character figures to unlock. 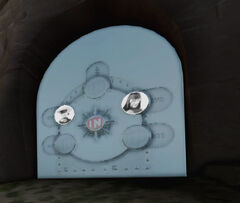 The Vault for the Lone Ranger Play Set Game is located past the Colby train station and to the left, near one of the Crow Wing Pack challenge markers (which will not actually be there until other challenges with the Crow Wing Pack have been completed). It can be reached as soon as the opening cut scene mission is completed and the player can move about the game freely.

Community content is available under CC BY-NC-SA 3.0 unless otherwise noted.