View source
watch 01:40
The Sandman Will Keep You Awake - The Loop
Do you like this video?
Play Sound

Pirates is one of three Play Set Games available with the Game Piece from the Disney Infinity 1.0 Starter Pack.[1] Sail ships on the high seas, choose and customize the crew, and then take part in daring missions on land. Find the mystical treasure before Davy Jones takes control of the seas and every pirate’s fate!

When not overridden by the Boom Box or other toy with its own music, using the Open Sea Sky skydome causes the game to play the Boom Box music "Shiver Me Timbers".

The Pirates Play Set includes a Vault, which requires each of the character figures to unlock. Once unlocked, "Pirates of the Caribbean Toy Box" is added to the list of Prebuilt Toy Box Worlds. 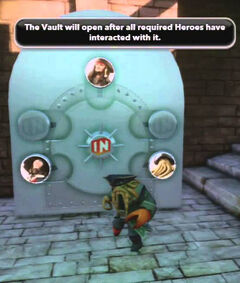 The Vault for the Pirates Play Set Game is located in a side building after meeting up with Pintel and Ragetti and fighting off three of Davy Jones' crew. Instead of following them to the next area, follow the fence on the left to a gate, and then head back to the right to the building where the Vault is located.