In the Toy Story In Space Play Set Game, help Buzz, Jessie, and Woody save the aliens and stop the evil Emperor Zurg!

Note: There are also "Mini" and "Giant" versions of each.

When not overridden by the Boom Box or other toy with its own music, using the "Infinity and Beyond" skydome causes the game to play the Boom Box music "Alien Emperor Zurg".

The Toy Story In Space Play Set Game includes a Vault, which requires each of the character figures to unlock. 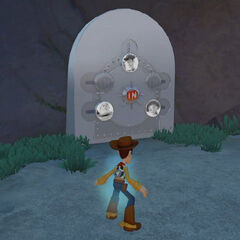 The Vault for the Toy Story In Space Play Set Game is located in an open area to the left of the Shield Tower. It can be reached once the player has completed the mission for the opening cut scene and is able to move about the game freely.